pt / en
Investimento
Lisbon REI Talks: The sustainable future and its implications on investment
As Portugal is waiting for a massive amount of funds coming from the EU Commission, the Government needs to present a plan of investment and 30% of that amount should go to the transformation for a sustainable future. 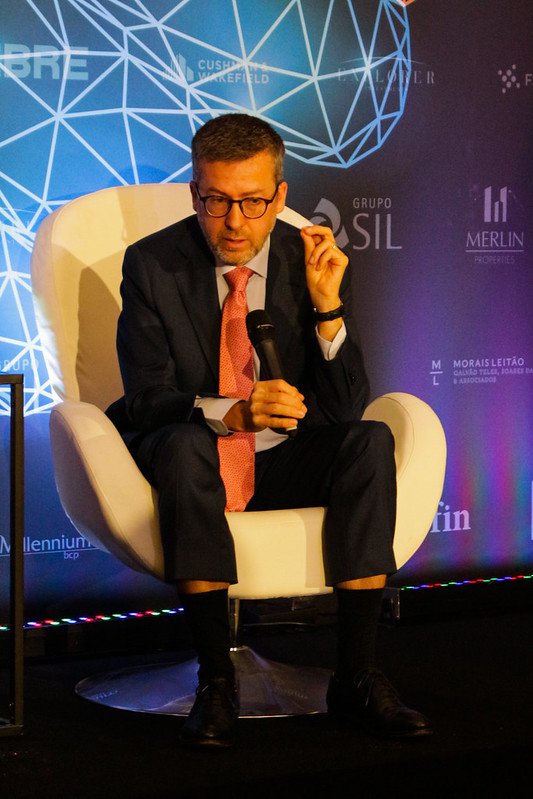 In Lisbon RE Investments Talks 2020 Carlos Moedas, Former EU Commissioner for Research, Innovation and Science, spoke about the transformation for a sustainable future and he referred to it as the next trend and «ready to happen now».

This trend, he said, will require that we invest more in technology but it will also mean placing our efforts in becoming more efficient in that matter.

And why is that? Well, at the moment around 50% of the patents registered world-widely come from Europe but somehow we don’t scale them up and we end importing solutions from countries like China, when we could have developed that internally in the first place. Carlos Moedas went further on this subject and he said that unfortunately «we turn money into knowledge, but we don’t turn knowledge into money».

A possible explanation for this is that the policy of innovation is there but we still don’t have the size to compete with other regions. Even though in relative numbers we face a similar investment compared to other regions the truth is that in an absolute perspective a single institute of Health in the US has four times more investment than the whole EU funds for science and innovation.

Facing these difficulties the Portuguese Government must be extremely thoughtful in how to apply these funds.  It is no secret that there are many companies and political parties worried about the misuse of those funds, what would be the case if they were destined to plug previous financial holes. Thus, the Government must interpret the EU funds as an opportunity to work on these problems.

Nevertheless, we reach a major question - where should we spend that money and how to control it?

The former European Commissioner pointed out three main areas that would benefit more from investment and at the same time could contribute more to a sustainable future.

Construction Business was the first one to be on the spotlight of this discussion due to their high levels of waste. In Carlos Moedas opinion, construction companies should now more than ever address their efforts in improving waste management - and the fundamental solution goes through investing in technology. “In Africa you have already 3D printed houses, meaning zero waste of materials! Of course that to a small village in Africa it makes total sense and maybe not in Europe, but the big picture is that you can see how technology is evolving”.

Following the same principle the second topic addressed was the energy efficiency that is naturally growing its importance not only in legal mechanisms and policies but even for regular customers.

And finally, a theme that certainly arouses curiosity - smart cities. Although we cannot yet see smart cities, we do see examples of it. And one of the key factors being already explored is mobility - the way we move from point A to B has a huge potential.
Once again technology plays a crucial role here because through Wi-Fi we can now collect a considerable sum of data that we can transform into useful information for designing the city, for urban planning, and much more.

As final keynote Carlos Moedas highlighted that in order for this changes to be possible the Government cannot be ashamed of asking help from specialists in a specific area, which means being open to the creation of co-decision mechanisms…otherwise we will never fully have smart cities because we won’t have smart governments managing those cities.