pt / en
Investment
MIPIM 2022 stages the first face-to-face debate between Carlos Moedas and Rui Moreira
The world is experiencing a process of transformation and cities are no exception, the pandemic interrupted the urban core, raising problems accompanied by other challenges such as growing population pressure, climate change, affordable housing, segregati 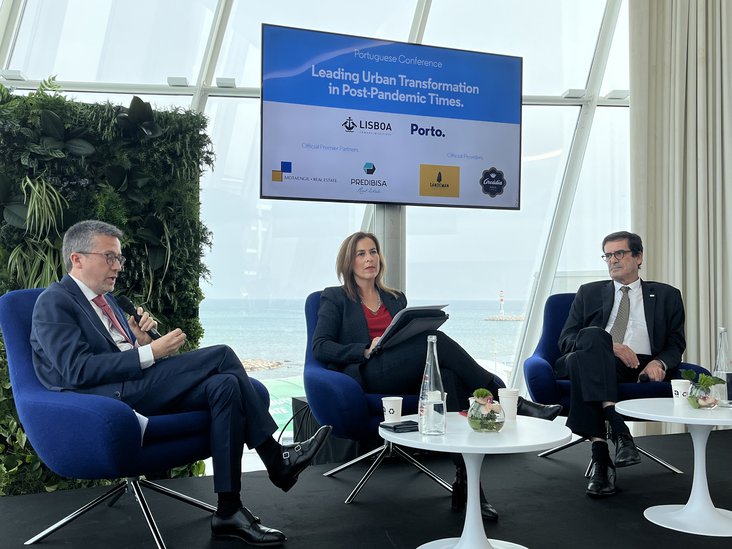 The concepts of city are evolving, and municipalities are currently assuming an increasingly important role in the development of the society, and in increasing the quality of life of citizens. The Portuguese Event at MIPIM 2022, “Leading Urban Transformation in Post-Pandemic Time”, marks the first face-to-face public debate between Carlos Moedas, Mayor of Lisbon, and Rui Moreira, Mayor of Porto.

In the Lisbon Mayor point of view, the rules for the cities in post-pandemic times have not changed. Carlos Moedas explains that “cities must follow two basic rules: the rule of concrete, and the rule of now”. Many times there is a tendency to speak about a European strategy, but Carlos Moedas recalls that development starts at the city level. The Lisbon Mayor went even further and stated that “cities are more powerful than states” and people want fast and adjusted solutions from politics.

On the other hand, Rui Moreira, Mayor of Porto, highlights that “The perceived power of cities from the point of view of citizens is different from the power conceded to municipalities”. Rui Moreira stood out the fact that the increasingly important role in the development of the society on behalf of municipalities is due to the fact that the cities are more accountable, since there is a higher proximity from the citizens.

What factors are limiting the cities development?

According to Rui Moreira one of the biggest challenges at the moment is the legal framework that is currently designed to result in an “excessive bureaucracy”, and that leads to a difficulty in adjusting the speed at which solutions can be delivered to the citizens needs.

Carlos Moedas agrees on the subject, and refers that both the available resources, and the strategy, condition the development of the cities; nevertheless ambition is also a propulsor for urban change and in this field “Lisbon has a global vision, and I would like to see our potential translate into becoming the European capital of innovation” assures the Mayor.

“The panorama for Porto is simple: people want an interesting and comfortable city”, states Rui Moreira. The urban development of Porto already reflects a new sustainable perspective to achieve carbon neutrality, with the necessary measures to maintain a positive growth - for which the participation of citizens is mandatory as many politic figures have already discussed during MIPIM this year. The Mayor of Porto is not concerned about how investors look at this changes, because in his own words “opportunities appear in times of change”.

In addition, Rui Moreira clarifies that Porto is doing a lot in sustainability matters, and one of the big investments is being made in public transports. As the Mayor stated, “we can’t expect that in the short term everyone shift to personal electrical vehicles, therefore we are tackling this challenge through replacing our public fleet for electrical and hydrogen consuming vehicles”. It should also be reminded that Porto is undergoing an expansion of its underground capacity, specifically with two new lines articulated with other cities.

Carlos Moedas shares the same opinion and comments that it is fundamental to “recreate jobs according to sustainability criteria”. In relation to affordable housing, the Mayor defends that “private and public entities must work together, as public alone cannot make it”. Carlos Moedas shares that one of the concerns for Lisbon is the high number of young people leaving the city to work abroad as there are not enough favorable conditions for them to initiate their professional life…innovation strikes once again as one of the Pilars of the Mayor as he believes that “we must raise new companies to attract capital, and to be able to provide our young pool of talent a good remuneration”.

By contrast, Rui Moreira outlines that “what we need is housing, since affordable housing is related to what people earn”. The Mayor defines that the first step is to increase disposable income, and the second is to reduce as much as possible taxes. The Municipality is willing to do concessions of 70 or even 80 years under the affordable housing model - something very interesting for investors; and data bespeaks the attention given by Porto to this theme: more than 13% of the population is living in social housing managed by the municipality.